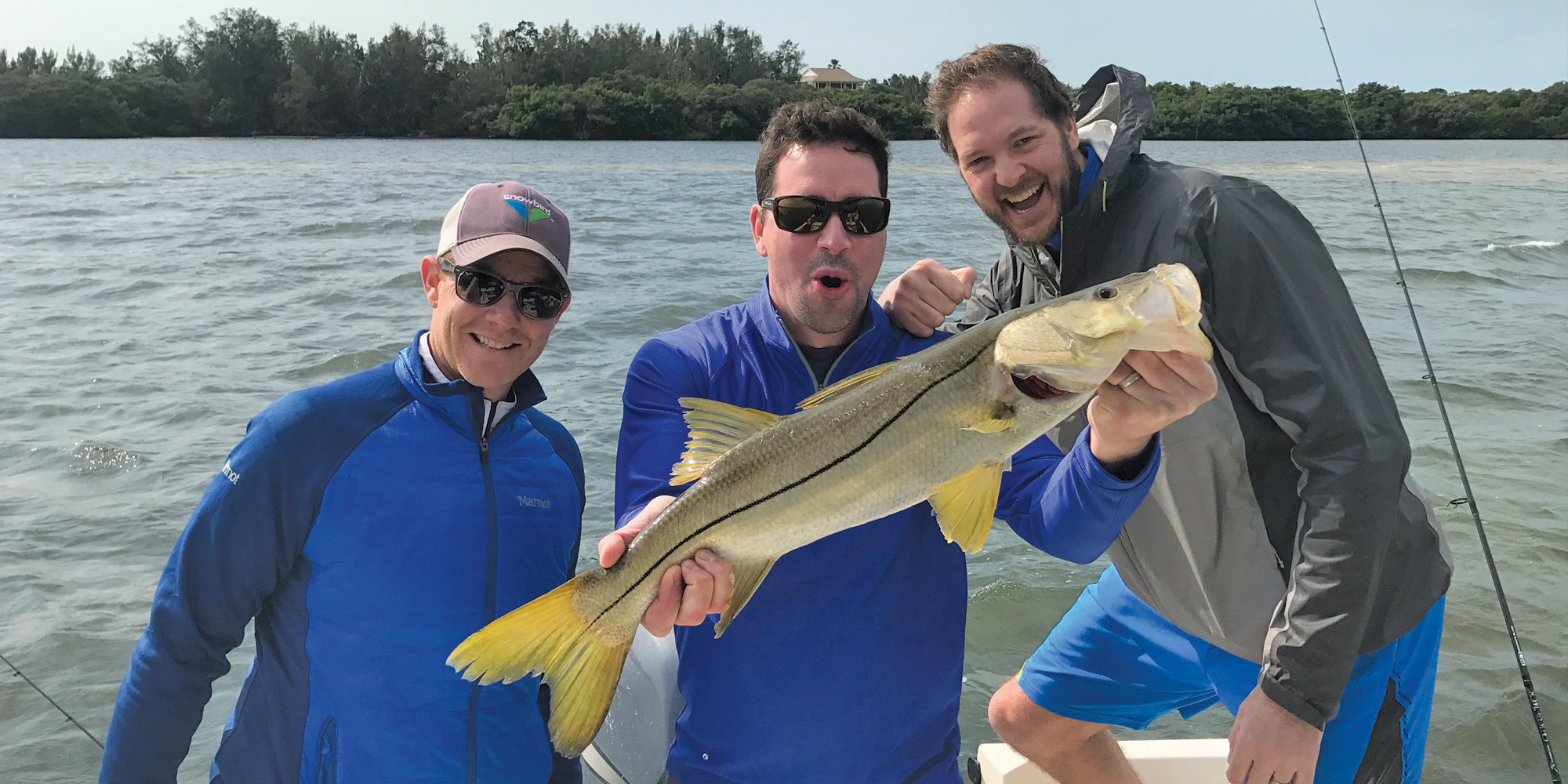 Here are species of fish that we’re fishing off the coast of Florida. We fish in the flats and in the Gulf so we can catch ’em all.

Amberjack The Greater Amberjack is a big, strong fish that grow well over a hundred pounds and are primarily target for their quick fast action once hooked. Amberjack eat small fish especially bigeye scad, as well as crabs, squid, crustaceans, and invertebrates. These fish live in offshore waters typically 60-240 feet deep. 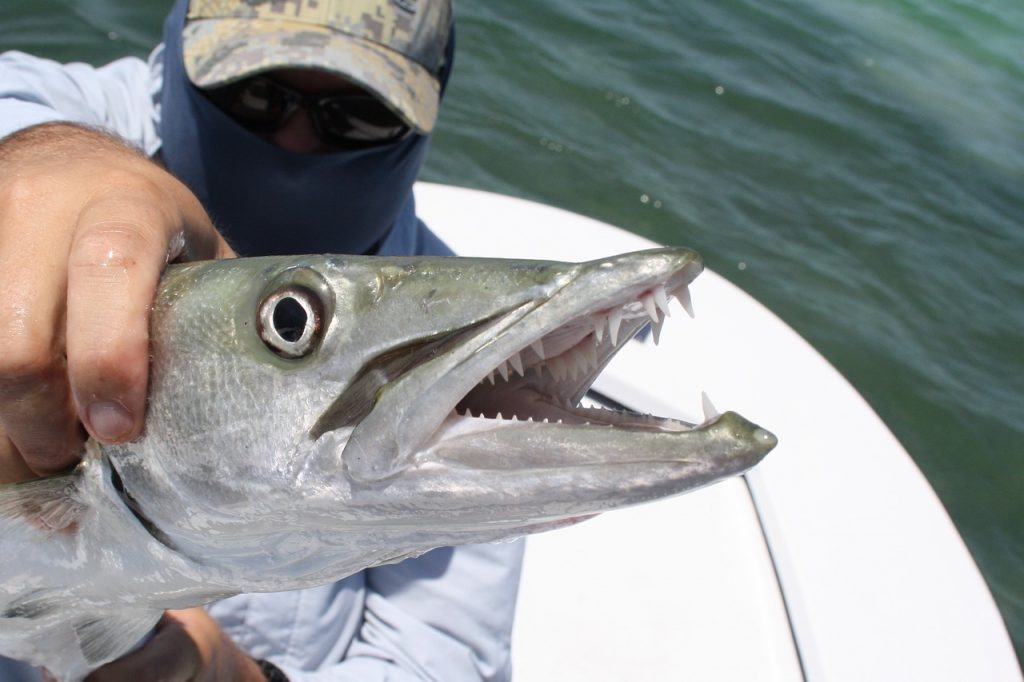 Barracuda The Great Barracuda is the only species of this large family located in Florida waters. The Great Barracuda can grow to 51 pounds and over 6 feet in length; most caught in Florida average 2 to 3 feet and 5 to 20 pounds. Barracuda’s are found offshore all over Florida traveling alone or in loose schools in open waters and lurking around reefs looking for the opportunity to ambush prey. Barracudas can swim over 25 miles per hour! These fish live inshore or offshore, usually hiding in seagrass.

Cobia The Cobia are a large species that grow to 4 feet and can weigh over 50 pounds, but most caught are in the 30 pound range. Mostly a solitary fish, you may sometimes find them in small groups in bays and inlets around structure. Offshore, Cobia feed on crab, shrimp, squid and small fish usually around shipwrecks and deep reefs.

Flounder  The Gulf Flounder is the smallest of the Florida Flounder averaging 1 to 2 pounds but can be caught up to 6 pounds. One way to tell this Flounder from the other 2 found in Florida is by the very dark spots on it’s back that form a large triangle.

Gag Grouper The Gag can be found on shallow reefs over rocks and reefs throughout Florida and they are usually caught around 25 pounds. The markings on their bodies can be described as “worm-like” and sometimes form kiss prints. Gag’s are considered to most the best tasting of all the Groupers.

Hog fish The Hogfish can be found in many color variations around hard bottom areas, coral reefs, rocky ledges and shipwrecks . The Hogfish averages 3 pounds and can be as large as 20 pounds offshore in deep water around 200 feet.

King Fish Mackerel Mackerel travel in large schools near the surface of the water, close to shore over sandy bottoms. King Mackerels can also be found near reefs, wrecks and other hard structures. Bottom fishing from bridges, piers, the surf and from boats is the best way to catch a Kingfish. King Mackerel are heavy feeders preferring herring, shad, sardine, pilchard, menhaden, jack, anchovy, ladyfish, mullet, drum, and will also eat shrimp, sand fleas and squid. These fish can be found around piers, in coastal, or in offshore waters.

Mangrove Snapper Mangrove Snapper are common in shallow waters especially around mangroves but larger Snappers move off shore to hard-bottom or reef areas for more food and shelter. Usually found at 10 inches inshore, they can grow to 2 feet offshore. Mangroves are inquisitive fish that will come out of their ambush spot to see what’s going on when they hear noise like your engines motor, but they will flee after hearing loud sudden noises.

Permit Permit are usually found in shallow, tropical waters such as flats, channels, and muddy bottoms feeding on crabs, shrimp, and smaller fish. Permit are commonly found from 20 to 30 pounds with the record in Florida at 51 pounds. Angler fish for Permit by stalking them by sight on shallow flats, and cast directly to them. Use fresh crushed crab and lobster in a dispenser for an excellent attractant for the Permit fish; use small live crab on your hook.

Pompano  Pompano are a highly prized food fish and sought after game fish that is usually between 6 and 10 inches long. This is a schooling fish and is a good pier and shore fishing target. Often confused with the Permit which is deeper bodied, Pompano rarely grow larger than 6 pounds, Permit are common to 40 pounds. They feed on mollusks, crustaceans, and sand Red Grouper Red Grouper like to hide in a hole and dart out to grab food and return to their hole. Due to this habit of darting out for food, they are opportunistic and will eat most anything. They prefer squid, crab, shrimp, lobster and octopus, but will eat any dead fish that sink into their habitat.

Red Snapper Red Snapper can live 25 years and weight more than 25 pounds with the record in Florida caught at 46 pounds. This Snapper is more abundant in the colder northern Florida offshore deep wrecks and reefs but can be found statewide. The Red Snapper feed on crab, shrimp, fish and worms.

Redfish Redfish are primarily an inshore fish found throughout Florida and can reach 45 inches and weigh 51 pounds. Redfish feed in shallow waters in schools and feed on a variety of fish such as Atlantic Croaker, Pinfish, Mullet, Menhaden, Flounder and also crabs and shrimp. Redfish have many feeding patterns from hiding behind structure to ambush their prey, to sucking prey off the bottom which is where you hear the term Redfish tailing (look for the tails above the surface). It is common to find them around mangroves and oyster bars feeding on the small crabs and shrimp.

Sheepshead  Sheepshead live near structures that have oysters growing on them such as mangrove roots, jetty rocks, docks, pilings, and piers. Sheepshead are common at 4 pounds but can be found further from the shore near navigational markers at 10 pounds or more.

Snook Snook can be readily found in bays usually around structures and in shallow water off beaches, but mostly in southern Florida. cannot survive in water temperatures below 60 degrees. They tend to feed two hours before sunrise and two to three hours after sunset with the best fishing during a tide change at these hours. Shrimp are by far the best bait for this elusive fish, especially when they come from the same waters as you are fishing. Some people use live pilchards with great success.

Tarpon Tarpon are found in mostly in coastal waters and estuaries where the water is warm and shallow with sandy mud bottoms. This large species is commonly 6 feet and over 100 pounds in south Florida and get get as large as 280 pounds. Often encountered solitary, they frequently travel in schools especially in the Keys. Tarpon feed on stingrays, mullets, silversides, catfish, blue crabs, sardines, anchovies, and pinfish. They are a sought after species for sports fishing but make terrible table fare, so catch n’ release is the game with this fish.

Tarpon are famous for their aerobatics once hooked. In order to keep your catch hooked you must bow to the Silver King and lower your rod tip by pointing it at him when he goes airborne. Your slack line keeps you line from breaking and the hook in place.

Triple Tail The Triplet ail is a surface fish, lounging around floating debris and buoys waiting for it’s dinner to arrive. They can grow to 40 pounds but are normally found much smaller. They have very sharp teeth and spines with razors for gills, so handle with care. Triple tail feed on smaller fish, shrimp and crabs and are very good table fare. We typically find these fish in bays and offshore waters.

Choose Reel Time Fishing Charters to catch your fish today. And remember, we supply the fishing gear, the permits, and everything else you need to make your fishing trip one to remember. Call us today: 941.518.9937

Where are we located?